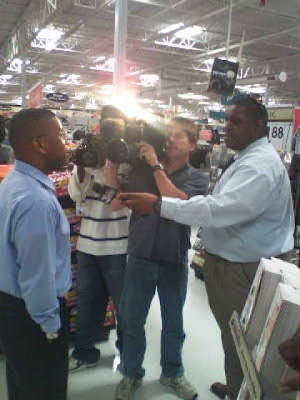 After an almost seven year absence from in front of the camera Mississippi native Cyrus Webb announces his return as the host of a new web show called "Conversations with Cyrus Webb".

"It just feels like the right time," says Webb. He was approached by Dwight "D. C." White of History Records and Entertainment about the show in February. "D.C. and I have worked together many times over the past decade. I agreed with him that there was a real need for something like Conversations on air." Plans began to be made about the show and "Conversations with Cyrus Webb" was born.

Webb is not new to televised programs. From 2004 to 2006 he hosted a weekly show on Jackson, MS' ABC affiliate 16 WAPT called "Conversations with C. A. Webb." Though the show was well-received, in 2006 Webb stepped away to focus on the magazine and building the co-ed book club. He would later tape segments to air on Jackson's Channel 18, however, he was mostly M.I.A. on television over the next several years.

Co-produced by Webb and Calhoun, "Conversations with Cyrus Webb" will include interviews, book features and discussions of issues that matter to Webb and that he believes others will find informative and enjoyable as well.

To celebrate the new program Webb is pleased to announce there will be a live taping in front of an audience of the first few shows on Sat. March 30th beginning @ 11a.m. at the Pearl Public Library (2416 Old Brandon Road * Pearl, MS). Admission to the taping is free, however, those who want to participate in being a part of the audience will need to arrive no later than 11a.m. Guests for the taping will be Glenda Hunter (abuse survivor and author of the book THE UNSPEAKABLE SECRET, actor/entrepreneur Kenyon Glover, reality star Bigg Marv (A&E's HAMMERTIME) and recording artist Ziggy.

For more information about the show or the upcoming live taping contact Cyrus Webb at cawebb4@juno.com or 601.896.5616. You can also visit www.cyruswebbpresents.com or www.conversationsmediagroup.com.
Posted by Conversations Magazine at 8:16 AM