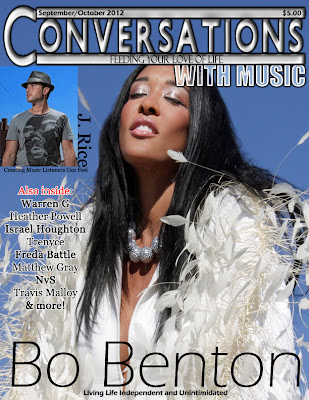 
Conversations Media Group is pleased to unveil the cover of the upcoming September/October issue of Conversations with Music Magazine. Featuring singing sensation Bo Benton, the issue highlights those in various genres that are "Living Life Independent and Unintimidated".

"With each issue we hope to not only profile great talent but share amazing stories as well," says Cyrus Webb, President of Conversations Media Group (CMG) and Editor-In-Chief of Conversations Magazine. "In this upcoming issue we do that and then some. We show people that no matter what your profession you can be fearless and success if you have your priorities in order and are ready to put in the work necessary."

The issue is $6.99 (shipping included) and is available for pre-order now, officially being released on Monday, August 27, 2012. Orders can be placed at www.conversationswithmusic.com or www.conversationsmag.com.
Posted by Conversations Magazine at 3:08 AM