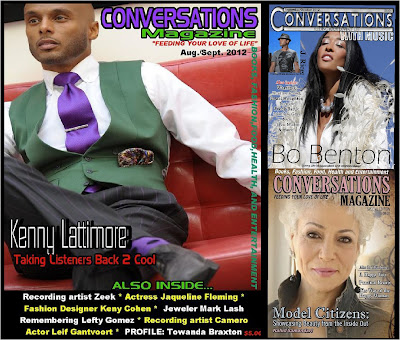 (Saturday, September 1, 2012 * Pearl, MS) Cyrus Webb, Editor-In-Chief of Conversations Magazine/Conversations with Music Magazine/ Conversations Model Citizens Magazine, invites you to CONVERSATION PIECES: the magazine release event for the new issues of each publication.This will be held on Sat. September 1st at Appetizers Restaurant (3000 HWY 80 * Pearl, MS) beginning @ 6p.m. Free wings while they last. Each new magazine will be available, and those who attend will be able to sign up for a year subscription (12 issues) to the monthly magazine for only $20!Admission to the event is free. For details contact Cyrus Webb at cawebb4@juno.com or 601.896.5616. You can also visit www.conversationsmediagroup.com and www.conversationsmediagroup.com.
Posted by Conversations Magazine at 3:40 AM