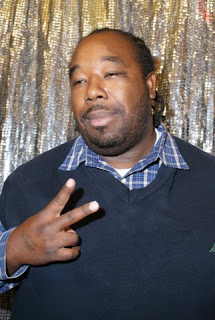 The world may have gotten to know him as the cousin of award-winning recording artist M. C. Hammer on A&E's hit reality show HAMMERTIME, but Bigg Marv is making his own moves and bringing attention to causes that matter to him.

Since 2010 he has worked with the organization Mission One Voice, working with military families and hosting events that provide awareness and entertainment for them. As 2012 comes to an end, however, Bigg Marv is venturing into another platform in order to give back: becoming a published author.

Partnering with Cyrus Webb, host of Conversations LIVE radio show and Editor-In-Chief of Conversations Magazine, Bigg Marv has begun co-writing a series of books called LOVING ME FOR ME. Aimed at the youth and incorporating messages about self-empowerment, self-worth and the importance of loving yourself, Bigg Marv and Webb hope to do their part in inspiring those who will be shaping the future and allowing them to realize their own potential.

"It's been great working with Marv on this project," says Webb. "I've been watching the way he is able to interact with his audience of all ages, and I think that this is just what they may need to see themselves in a different way." "I've always been passionate about the youth," adds Bigg Marv. "The support of young people is one of the reasons I was so popular on the HAMMERTIME show. I think what Cyrus and I are doing through this series is going to show them not only what is possible but how they don't have to be limited by their circumstances."

The first book in the series, WATCH ME SHINE, is a message about allowing your gifts to shine through. It will be released by Conversations Media Group as an e-book on Tuesday, December 11th and available for free download for the rest of 2012. Look for Webb and Bigg Marv to be visiting schools and making other appearances sharing the message of the book.

For more information about the new literary venture contact Cyrus Webb at cawebb4@juno.com or visit www.conversationsmediagroup.com.
Posted by Conversations Magazine at 11:38 AM