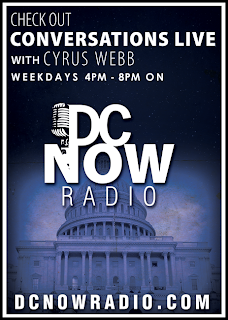 Conversations Media Group is pleased to announce that DC Now Radio (www.dcnowradio.com) has released its 5 most popular interviews from Conversations LIVE:

Founded by celebrity photographer Anthony Tilghman in April 2012, DC Now Radio has not only gained its own loyal following, but proved a great partner for Conversations Media Group along the way. Tilghman wanted to bring a sports & talk radio station to the nation's capital and partnered with Conversations Live to debut on DC NOW RADIO hosted by Cyrus Webb.

"It's great to see that the hard work and professionalism we try to bring to the airwaves is finally reaping the rewards," says Cyrus Webb, creator and host of Conversations LIVE. The radio show debuted on WMPR 90.1 FM in Jackson, Mississippi in July 2003 and has since become the popular place for individuals of all walks of life to come and share their stories with the world and showcase what is possible. DC NOW RADIO has over 1,000 daily listeners and over 10,000 viewers per week on the website.

"This is just the beginning," says Tilghman. "I see this new partnership as a way for Conversations LIVE to really grow and raise the bar for talk radio and we're glad to have it as part of the DC Now Radio family."